Been on top deck today polishing our mushroom vents. The planters had to go as I couldn’t see over them. It will be brilliant for sunbathing next summer.

Walked to a farm shop to replace frozen vegetables, which had black gooooo coming out of them by this morning, then onto Shugborough Hall. Murk doesn’t even raise his head anymore if you say ‘walk’, he’s constantly exhausted – ha ha. Not sure how but we managed to miss the ticket office. Thinking of buying this for next renovation project:) 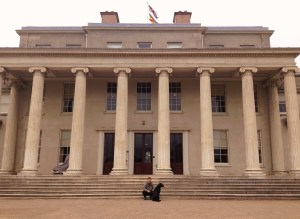 Forgot to mention the BIG news yesterday! Sat on a paddle waiting for another boat to come up when suddenly the boat flew in, still in gear, walloped the font gate then rammed backwards, before an impish man and his wife came running up the steps and maniacally wound the paddles. Nick and me rolled our eyes like ‘idiots can’t even manage a lock’ then I muttered something about ‘simpleton’ but Roy was looking very animated and chatting away with them. Not undestanding how ’tiller master’ Roy could even entertain such bad lock behaviour – we waited and gave the imp an eye roll as he leapt on his boat. By which time Roy and Clare were looking quite star struck…turns out we’d been in the vacintity of Posh n Becks of the Waterways – check him out. http://www.canalnarrowboats.com/

Another discovery was our brainwave to store vegetables in the turned off freezer was not so good, maybe we’ll try again when we understand which switches operate what. 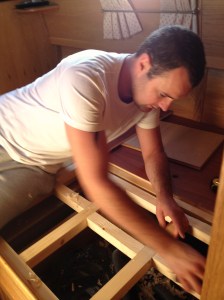 Glad to be woken this morning by Phil the carpenter who was on his way to stop the stink! All sorted now.

Drove to Great Hayward marina to pick Clare and Roy up. Then on the windiest day so far we decided it was time to pump out the ‘waste’ and fill up the diesel, unfortunately this involved crash bridge, fortunately Roy was on the tiller. He pulled out a show stopping performance holding the beast while another boat filled up. Then it was us up. Pump out very hygenic and non-smelly! Diesel very expensive but luckily won’t happen that often. Then we left…and we’re still not back… 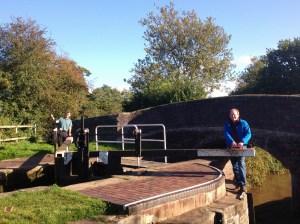 Locks were fun, Roy taught us the equivalent to an emergency stop which is probably going to be very handy and how to tie a boatmans hitch. Lots of winding round corners and through boats until we left the Trent and Mersey canal and moved onto the Staffordshite and Worcester canal – oooooeeee. Then Clare and Roy left us! And that’s where we are…for the whole night, or maybe two or three. We’re moored by the tow path at Tixall Wide http://en.wikipedia.org/wiki/Tixall_Wide – it’s as though we’re properly narrowboating now and the feeling is quite different to being in the marina – especially showering on what is practically the tow path other than a a sheet of steel and a port hole! The scenery is beautiful, we stood on the stern as the sun disappeared and did the appreciation moment  before rushing in, closing the curtains, cranking the fire, turning on x-factor and making spaghetti bolognaise – very sad we know! 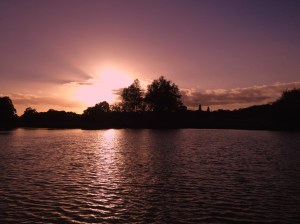 Some role reversal today, so we both did what we’re least good at. Nick was great, I was okayish, even held the boat in the middle of a windy marina for ages while people filled with diesel until finally, feeling very relieved to move I totally missed the mooring and began to head back out the marina ….so I pressed a clever button only discovered th

is morning which rings a bell in the cabin, suddenly Nick appeared through the door like Mr Ben…or James Bond…nope..Mr Ben and rescued me. The blue spot is where we had lunch, we could see water, grass and cows.

Cupboards are full, anymore tomatoes and they might sink us!

No hoods or wet hair today, hooray. Beautiful afternoon, we turned, did locks, got in and out of the marina, reversed, moored and had a couple of dings – one quite big one through a very tight bridge in the marina where a boat was taking FOREVER to fill up with diesel AND THEN decided he wanted to reverse for pump out, by which time the wind had taken our end, he waved us thro 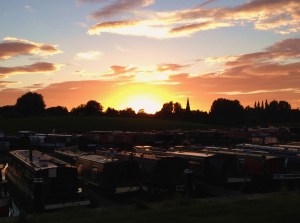 ugh and so he got crunched…next time he might loop the marina for his pump out:) Murk’s tow path walk was cut short by the sound of what turned out to be a fire alarm inside the boat, a hectic fire inspection followed, whilst Nick was stuck at the stern of a potentially explosive boat. Hopefully dry tomorrow for more of the same, things are improving but more practice needed before we go!

This is kind of how much it’s cost to run so far (6 days): electricity £2.76, coal £11, diesel unsure but approx 12% of tank and we don’t know how much it costs to fill up, water is free (included in license) and no pump out yet! Beats our last quarterly EDF bill which was a bumper £3,622.62p, thanks to them not reading the gas meter for 8 years – shocking.

The water levels are rising and we’ve slackened off the ropes, having firstly tightened them to stop the boat getting washed away, before being told this would tip the boat over. Three fire engines were by the canal this evening rescuing stranded sheep on inflatable rafts. The rain can stop now please!

If your eyesight is good enough! Saw lots of these today x

We couldn’t put it off anymore so we turned the key and reversed surprisingly well. Leaving the marina we planned to turn left…only 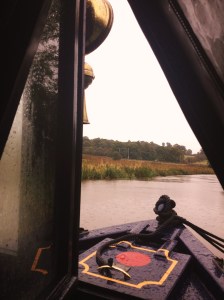 to go right…soooo we looped back through the marina, waved to EVERYONE again and on the second attempt turned the 60ft monster left. Then the three of us chugged on until we got close (ish) to the tow path, when Murk decided he preferred dry land, so leapt off and joined a walker and his dog – leaving us in the middle of the canal! Oh yes and needless to say it was pissing down with rain. Finally got him back on the boat. Did a lock very happily and lots of bridges. Decided to go past the first turning point, they are generally 70ft, and continued to the second, which to my horror was surrounded by moored boats. Nick did alot of waving to show me where to turn, which I did eventually by nearly taking down someone’s garden wall and trellis – whoever can’t see the benefit of a bow thruster is either crackers or good at sterring a narrow boat. For quite a while I created a complete canal block!! By 4 ‘o’ clock we were wet, shivering and The Murkster had thrown up on the rug; but despite having a little less paint on it than this morning the boat is back in it’s mooring in one piece! Needless to say Nick much better at the whole steering business than me. 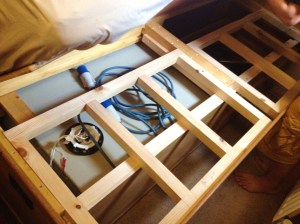 It turns out luxury comes at a price. For anyone who wondered the ‘waste’ is stored under our bed….mmm nice:) And we have a brand new bed extension which gives us a full 5ft! Turns out is also gives an interesting smell when the wind is blowing through the vents under the bed – a little project to work on quick. Cheapest contraception going.