Our luck was in with the locks, with every gate wide open we sailed straight in. It was bright and breezy and the autumn leaves tumbled from the trees as we travelled up through a quiet Camden and past London Zoo.

Back into waters that are set to become more familiar as time goes by. After two winters out we’ve decided to take a mooring and enjoy the combination of Murk’s paws and concrete, rather than him squelching through endless gloopy mud. 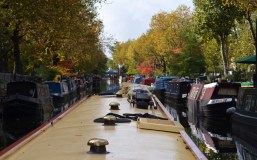 Best bits is a tricky one. There’s too little time before the end of the world for Nick to decide on his, but generally speaking the experiences that spring to mind tend to be the ones that verged on, or were scary…

And the top moorings…

There’s little left to say. The end is where the journey begins.

A night in Hackney Marshes turned out to be unbelievably quiet considering the long, long lines of people going about life along the towpath. It wasn’t much of a journey before turning off onto the Hertford Union Canal – also known as ‘Duckett’s’ after Sir George Duckett who tirelessly lobbied for construction of the 1.5 kms of water designed to bypass the torturous, tidal Bow Back Rivers of the Lea. The canal was a commercial failure and in less than 20 years after its opening

in 1830, it was unnavigable. All restored and working well today, the canal began with Old Ford Locks and soon had a feeling of time gone by which lasted to the join up with the Regent’s Canal.

Having chopped out Limehouse and Mile End we emerged in Bethnal Green. The

Victoria Park moorings were heaving with boats, up through Haggerston, Hoxton and Islington where we disappeared into the gloom of Islington tunnel. Oblivious to the changes that have gone on all around, the tunnel stands just as it did when it was opened in 1818.

nd electric. Tucked down in a far corner where Ice Wharf Marina and Battlebridge Moorings meet, the visitor gap has proper old warehouse views. The Canal Museum is situated in Carlo

o made his fortune importing ice from Norway in the 1860’s. The ice was shipped from Norway, travelled up the Thames, was offloaded onto barges in Regent’s Dock (Limehouse) and

finally up the canal and into the warehouse. He soon became the largest ice importer in London, making ice-cream affordable for the not qui

te so rich, plus the option of domestic ice boxes thanks to his fleet of delivery carts..

A few minutes walk from the peace of Battlebridge Basin is the bustle of Kings Cross and beautiful St Pancreas Station that only just avoided demolition in the 1960’s architectural smash up.

Quite mad to think we could be in Paris in less time than it would take us to travel back to Hackney Marshes.

The Lee Valley Country Park at Cheshunt provided a great place to stop on many levels, there was even entertainment for The Murkster. But 3G was flaky. The moorings are popular and were pretty filled by the time we pulled our pins.

A short drop down a couple of locks landed us at a very handy spot for Home Bargains, Pets at Home, maggots via vending machine (?) and King Harold’s tomb. As with most kings who died in battle there are a certain amount of

conspiracy theories surrounding the arrow and the eye: any man who guarded his coast with such determination would have been buried by the sea shore; the tomb was a red herring… King Harold actually survive and lived out his days a hermit up in Chester…and many more. Anyhow, there were film crews filming what looked something like Time Team and so far as Waltham Abbey is concerned King Harold’s resting place is right there, under the high altar, with them.

One sack of brown balls is usually enough to send Murk bananas, so the arrival

of five left him slightly overwhelmed yet happy in the closest he’ll probably ever get to greedy labrador heaven.

After a water fill and rubbish dump, we were back on the move, down through one final lock before parking up for a night on one of the last stretches of rural Lea before London begins to open up all around. Perhaps not as pretty as the Stort but 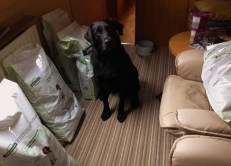 then the Lea has had a hard life – in the first half of the 20th century it was the UK’s ‘silicon valley’, site of an electronics revolution with the invention of the diode in 1904. Thorn MK, Ferguson, Belling and Amstrad all set up factories along the brilliantly functional stretch of water.

Mild tonight and the ceiling has finally stopped dingle dangling with rain.

Not one turn of the prop happened today, instead we stayed put and winterised the boat – not in a drain and leave it kind of way but in a re-jiggling to make as much space for coal and dog food as possible kind of a way. The triple glazing went up too – lovely stuff!

With just a couple of boats passing by there wasn’t much action, although the whole area is 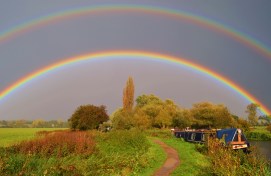 teaming with swans and geese and sheep. With the chimney swept, anchor away, coal storage sorted, cupboards cleaned and windows plasticed we’re ready for the worst the winter can throw our way.

It turns out you can get just about everything you need in Harlow. After another trip to the ‘heart’ of the town centre we battled our way back through a huge t

hunder storm and another massive downpour. By mid-afternoon the skies had cleared leaving windy conditions but at least it was dry. A short way up river we turned at Moorhen Marina, filled with water and decided not to chance the rising waters but to begin a slow return towards London. It will be a slow one as we

only moved on three locks this afternoon, before mooring terribly, right on a bend and shutting up for the night; it shouldn’t matter too much as nobody seems keen to venture out in the stormy conditions. It may not have been the most pleasant of days for travelling but it was an awful lot calmer than this time a year ago.

The fire is kicking out plenty of heat, the living pod is doing a great job fending off the nasty weather out there in the darkness tonight.

The river continues to curl deeper into Essex and on towards Bishop’s Stortfort, but the rain continues to fall and the levels are rising. The pitter patter on the roof isn’t creating the cozy, comforting, snug feeling it usually does. The locks are neither here nor there, at 13.25ft they’re wider than single but not enough space for two boats meaning that r

oping is a certainty as the paddles are pretty sharp. Opened in the 1780’s the canalised navigation was originally part of grander plans to link London to Kings Lynn, main cargos included: wheat, beans, peas, flour, coal and pig

On past Parndon Mill that’s been immaculately restored since the 1960’s and serves as a creative place for artists with all sorts of skills. With a long history dating back to a mention in the Domesday Book the mill has fallen victim to numerous fires, due to the combustible nature of the flour milled from the grain produced from the rich surrounding farm land.

…And then we came to Harlow.

Moored just by the station, with a waterpoint just a boat’s length back it wasn’t rural idylic but there were plus points. Plus the town is just a short walk away. Brain child of world-renowned architect Sir Frederick Gibberd, the town’s promoters promise, ‘Whether you’re planning a few hours, a few days or a lifetime here, Harlow won’t d

isappoint.’  A New Town, built after World War II to ease overcrowding caused by bombing during the Blitz it boasts Britain’s first pedestrian precinct and ‘modern style’ residential tower block. With rail links to London Liverpool Street and proximity to the M11 it has secured itself as part of the London commuter belt. Like it or not, you can’t argue with anywhere that offers up Poundland, Wilkos, 99p Store AND Savers all one after the other.

It was set to be a quiet night since the trains have all but stopped but a car has rolled up, crammed full of passengers who seem to enjoy listening to the same thumping beats, over and over and over. Okay bring back the rain.

A stark contrast from the River Lea, the Stort twists and turns, is peppered with ol 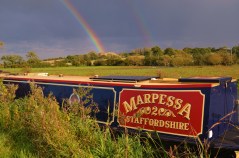 d water mills and heads towards Essex at a fairly rapid rate. London feels (and is) quite a way away: the water is clear, bridges aren’t splashed in paint and a whole world of wildlife appears to be thriving. Ploughed fields ran alongside the river for most of the day.

you might need from an ice cream to your laundry done. The owners are unbelievably helpful and we left stocked with all boaty

essentials… a word of warning followed our exit from the lock ‘Don’t stay up there for too long or you’ll never get back under the bridge, the levels are already up.’ Oooh okay, it’s nice up here but I’m not sure a whole winter

at the top of the River Stort might be such a good idea. The rain can stay away please. Peculiarly Nicholson seems to have given up providing a map for our current section, so we’ll be reading the footnotes and imaginging what lies ahead.

Far from busy, but there are a few boats moving about and a good few windows casting orange glows across the water tonight.